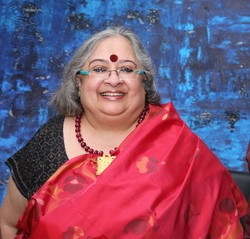 Dr. Alka Raghuvanshi is India’s first trained art curator, having trained at the Goldsmiths College, London and the Museum of Modern Art in Oxford. She has created and designed nearly 20 major exhibitions both in India and abroad.

A keen painter herself, her solo exhibitions drew valued response and her works formed part of some very important shows both at the National and International level, including the Adana Biennale (Turkey) and the ongoing worldwide exhibition Giuseppe Garibaldi emanating from Turkey.

A senior columnist and author, she has been on the Editorial Teams of the Indian Express, The Times of India, Pioneer and The BBC, where she consistently wrote to cover the entire spectrum of the Arts. As Editor of Swagat she re-designed and re-launched the magazine. She launched Pioneerarts.com, the first of its kind website on the performing and visual arts. She has authored and edited over 20 books including.

A Moment in time with legends of Indian arts, Pathfinders – artistes of one world and Garhwal Himalayas – Where the Gods whisper.