City behind the Clouds
Home 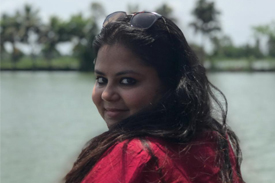 Born and brought up in UP, Poulomi Bose moved to Delhi for her graduate education and pursued an Honours degree in English from IP College, DU, MA in English Literature from JNU and Mphil in English Literature from Hyderabad Central University. She has taught in various colleges in Delhi University for 4 years as assistant professor of English Literature. Her areas of interest include Victorian Literature and Literary Theory as well as Communicative English, and she has taught language proficiency courses in both JNU and DU. A constant academic achiever, Ms. Bose has several publications to her credit in various national journals and books, and she has also presented papers in prestigious institutions like DU, University of Hyderabad, Jamia Millia Islamia, Jadavpur and Osmania University. She has also published a novella, a short story and several poems. She started writing poems while in college, initially to pour out emotions and experiences into words, which later grew into a way to resist and speak up against sociology-political issues that she feels strongly about.

Get in touch, or swing by for a cup of coffee.