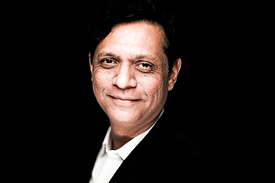 Vihang A. Naik collections of poems includes City Times and Other Poems (1993), Making A Poem (2004) and Poetry Manifesto ( New & Selected Poems) (2010). His Gujarati collection of poems titled Jeevangeet (Gujarati poems) (2001) is dedicated to the cause of victims of Gujarat Earthquake 26th January, 2001. He also translates poetry written in Gujarati language into English including his own Gujarati Language poems into English. His poems have appeared in some of the most noted literary journals and anthologies. His poetry has been translated into Japanese, Spanish, Italian, German and Portuguese languages. He lives and works in Gujarat, India. His literary info can be found at https://vihang.org

Get in touch, or swing by for a cup of coffee.